This was really incredible. It really opened my mind.

That was incredible. It really opened my mind.

We have been hearing increasing charges and countercharges of “hate speech” and “hate crimes,”  hurled at and by speakers from across the ideological spectrum. In November 2016, the New York Times editorial board launched a weekly feature entitled “This Week in Hate.”  During the Presidential campaign, both Donald Trump and Hillary Clinton were accused of “hate speech.”  On college campuses, that accusation has been made by and against everyone from Black Lives Matter activists to alt-right provocateur Milo Yiannopoulos.

U.S. law secures freedom even for hateful, hated ideas, viewing this as essential for both individual liberty and democratic self government. Yet polls show strong support, especially among younger people, for imposing more restrictions on offensive speech, especially concerning the sensitive subjects of race, sex, and gender. Would such restrictions promote the essential goals of equality, inclusion, diversity, and social harmony? Or could these restrictions actually do more harm than good? What can we learn from the experience of other countries in enforcing their anti-hate speech laws? How can we fight hatred with free speech, rather than censorship?

Nadine Strossen is the John Marshall Harlan II Professor of Law at New York Law School. She has written, taught, and advocated extensively in the areas of constitutional law and civil liberties, including through frequent media interviews. From 1991 through 2008, she served as President of the American Civil Liberties Union, the first woman to head the nation’s largest and oldest civil liberties organization. Professor Strossen is currently a member of the ACLU’s National Advisory Council, as well as the Advisory Boards of EPIC (Electronic Privacy Information Center), FIRE (Foundation for Individual Rights in Education), and Heterodox Academy. When she stepped down as ACLU President in 2008, three Supreme Court Justices (Ruth Bader Ginsburg, Antonin Scalia, and David Souter) participated in her farewell and tribute luncheon.

Her  book, HATE: Why We Should Resist It With Free Speech, Not Censorship, was published by Oxford University Press in May 2018. University of Chicago Law Professor Geoffrey Stone, a noted First Amendment expert, wrote in his foreword to the book, “Strossen stakes out a bold and important claim about how best to protect both equality and freedom. . . . No one can address this issue in the foreseeable future without taking on this formidable and compelling analysis. It lays the foundation for all debates on this issue for years to come.”

In 2017, the American Bar Association presented Professor Strossen with the Margaret Brent Women Lawyers of Achievement Award, which “celebrates the accomplishments of women lawyers who have excelled in their field and have paved the way to success for other women lawyers.” The National Law Journal has named Professor Strossen one of “The 100 Most Influential Lawyers in America”; Vanity Fair included her in “America’s 200 Most Influential Women”;  Ladies’ Home Journal named her among  “America’s 100 Most Important Women”; Working Woman Magazine listed her among the “350 Women Who Changed the World”; and Upside Magazine included her in the “Elite 100: 100 Executives Leading The Digital Revolution.” In 2005, she was honored by the University of Tulsa College of Law and the Tulsa Law Review, which made her scholarly work the subject of its Fifth Annual Legal Scholarship Symposium, entitled “Nadine Strossen: Scholar as Activist.”

Professor Strossen has made thousands of public presentations before diverse audiences, including on more than 500 campuses and in many foreign countries. She has commented frequently on legal issues in the national media, having appeared on virtually every national news program. She has been a monthly columnist for two online publications and a weekly commentator on the Talk America Radio Network. In October 2001, she made her professional theater debut as the guest star in Eve Ensler’s award-winning play The Vagina Monologues during a weeklong run at the National Theatre in Washington, D.C.

Professor Strossen’s writings have been published in many scholarly and general-interest publications (more than 300 published works). Her book, Defending Pornography: Free Speech, Sex, and the Fight for Women’s Rights (Scribner, 1995), was named by The New York Times as a “Notable Book” of 1995. Her co-authored book, Speaking of Race, Speaking of Sex: Hate Speech, Civil Rights, and Civil Liberties (NYU Press, 1995), was named an “outstanding book” by the Gustavus Myers Center for the Study of Human Rights in North America.

In 1986, Professor Strossen became one of the first three women to receive the U.S. Jaycees’ Ten Outstanding Young Americans Award; she was also the first American woman to win the Jaycees International’s Ten Outstanding Young Persons of the World Award. She has received honorary Doctor of Law degrees from the University of Rhode Island, the University of Vermont, San Joaquin College of Law, Rocky Mountain College, the Massachusetts School of Law, and Mount Holyoke College. Other awards include the “Above and Beyond Award” for Education from City & State magazine, “Celebrating 25 of New York’s Most Remarkable Women”; the National Forensic League’s Lifetime Achievement Award; the Media Institute’s Freedom of Speech Award; the Free Speech Coalition’s Freedom Isn’t Free Award;  the Jewish Council for Public Affairs Albert D. Chernin Award; the National Council of Jewish Women’s Women Who Dared Award, and the Women of Distinction award from the Women’s League for Conservative Judaism.

Professor Strossen is a member of the Council on Foreign Relations.

Praise for Strossen's upcoming book: HATE: Why we should resist it with free speech, not censorship

"While other countries provide significant
protection for free expression, the United States provides a significantly
elevated level of protection, particularly for hateful speech. Nadine
Strossen's insightful and eminently readable study on why we protect such
speech and why we should continue to do so is an all-too-rare example of
first-rate legal scholarship that the public at large can learn from and savor
reading." — Floyd Abrams, Senior Counsel, Cahill Gordon
& Reindel; Adjunct Professor, NYU Law School; Author,

“Professor
Strossen forcefully reminds us that the First Amendment means what it says and
that the right antidote to hateful speech is robust free speech and `counterspeech’
affirming our common values.” — Senator
Lamar Alexander

"Strossen has accomplished something
remarkable in this slim book - she has ventured into a complex and heavily
examined field and produced a book that is original, insightful, and clear-headed.
My guess: this book will become the go-to work in the field." — Ronald Collins, Harold S. Shefelman Scholar at
the University of Washington School of Law, Publisher of

"One
of life's hardest tasks is to tell natural allies they are wrong.  Nadine
Strossen is clear in a time of confusion, consistent in an era of hypocrisy,
and brave in an environment of intimidation.  Her book is a fitting
capstone in a career in defense of our civil liberties."  — Mitchell Daniels, President of Purdue University and former Indiana Governor

“Well-intentioned, but misguided, people today are clamoring for what
amounts to censorship of speech they deem to be hateful. Nadine Strossen
explains why the criminalization of advocacy, even advocacy of hateful ideas,
imperils honorable freedoms. What’s more, she provides a robust defense of a
piece of old-fashioned, but oft-forgotten, wisdom: The safest—and most
effective—way to fight bad ideas is not by limiting the right to free speech, but
by exercising that right to counter them.” — Robert P. George,  McCormick Professor of Jurisprudence,
Princeton University

"In this work, Strossen stakes out a bold and important claim about
how best to protect both equality and freedom. Anyone who wants to advocate for
'hate speech' laws and policies in the future now has the `Devil's Advocate'
right at hand. No one can address this issue in the foreseeable future without
taking on this formidable and compelling analysis. It lays the foundation for
all debates on this issue for years to come." — Geoffrey Stone, Edward H. Levi Distinguished Service
Professor of Law, University of Chicago Law School

“Nadine
Strossen is one of the great civil libertarians of our day. This book provides
a powerful and subtle defense of free speech. Don’t miss it!” — Cornel West, Professor of the
Practice of Public Philosophy, Harvard Divinity School and Professor Emeritus,
Princeton University 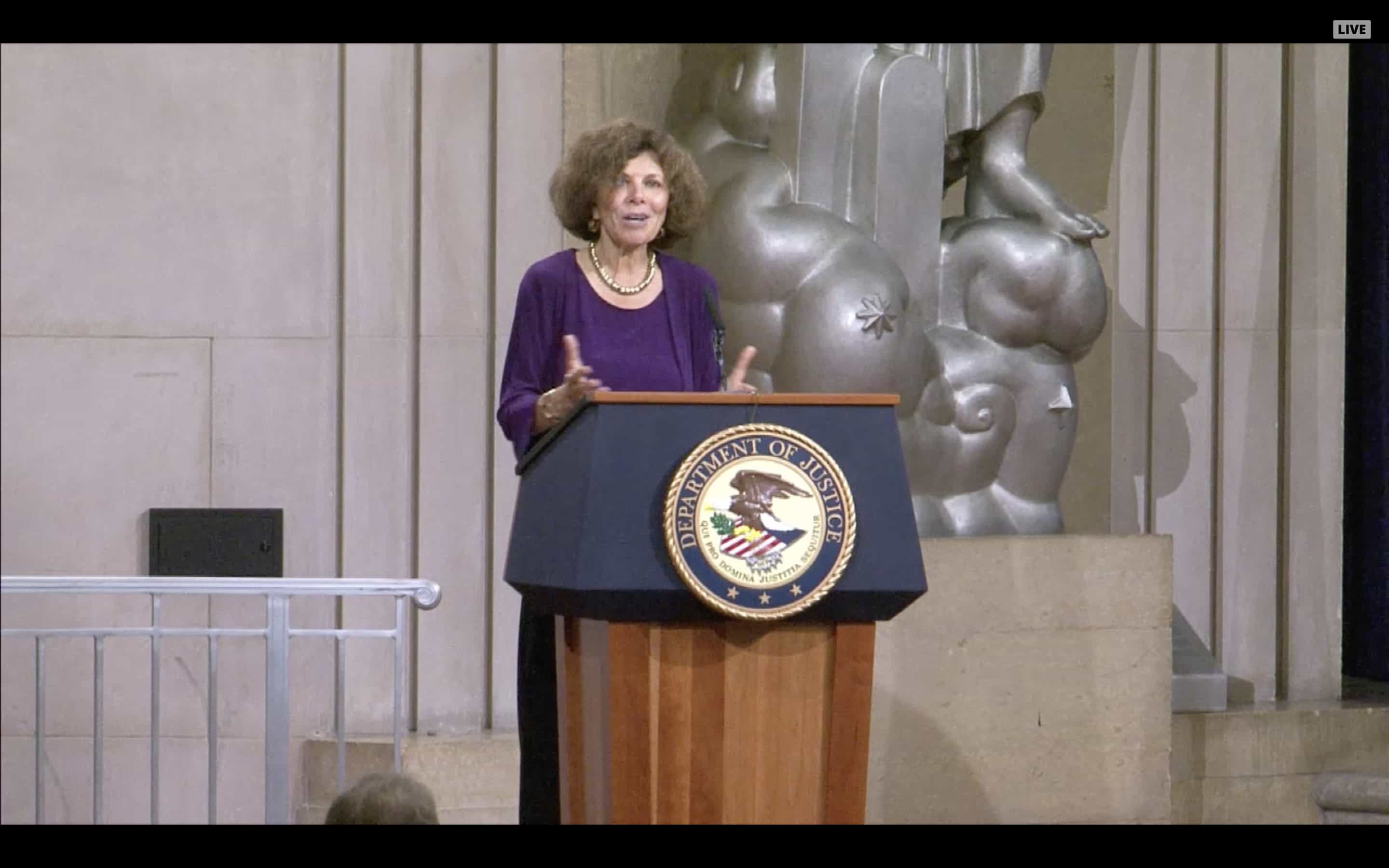 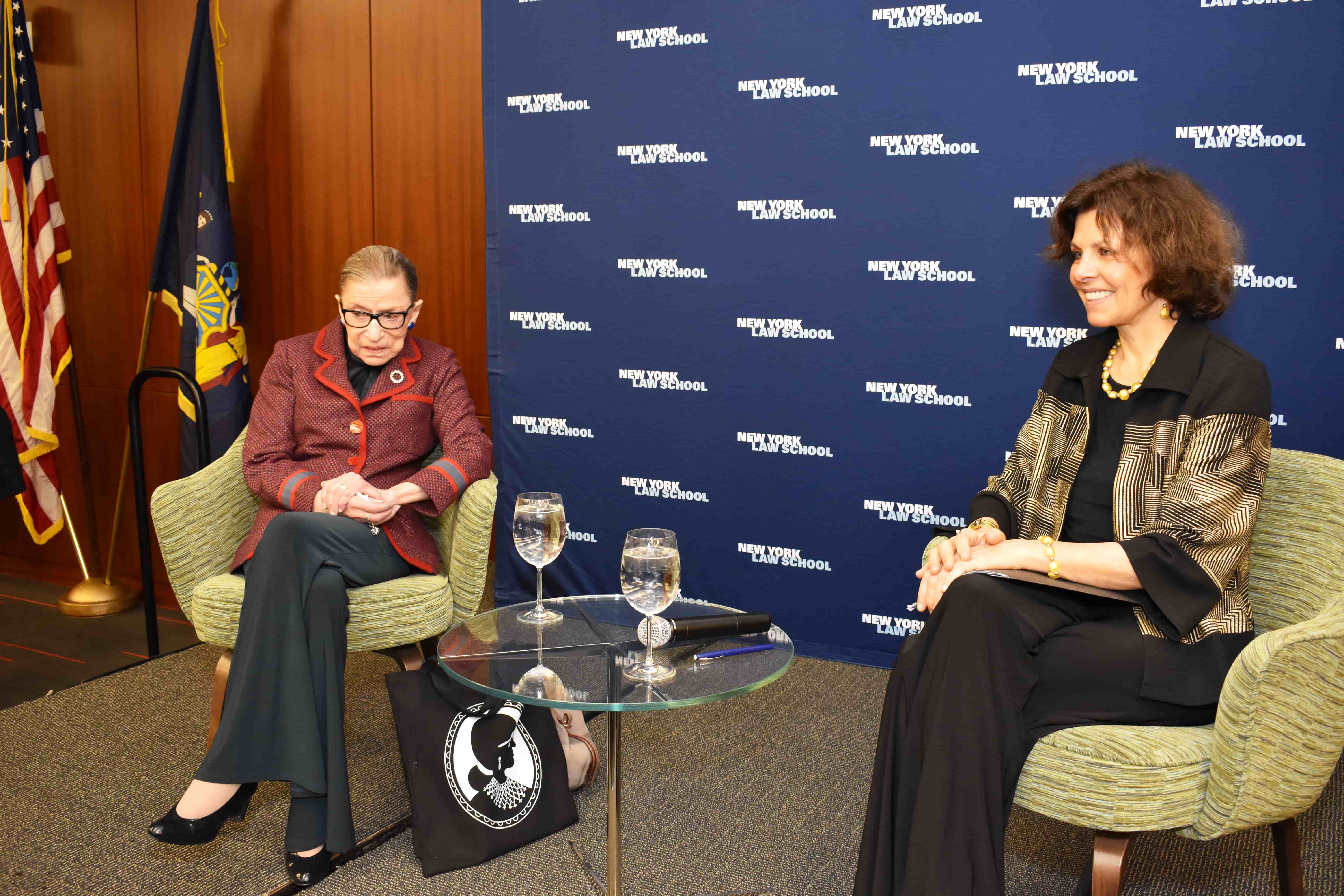 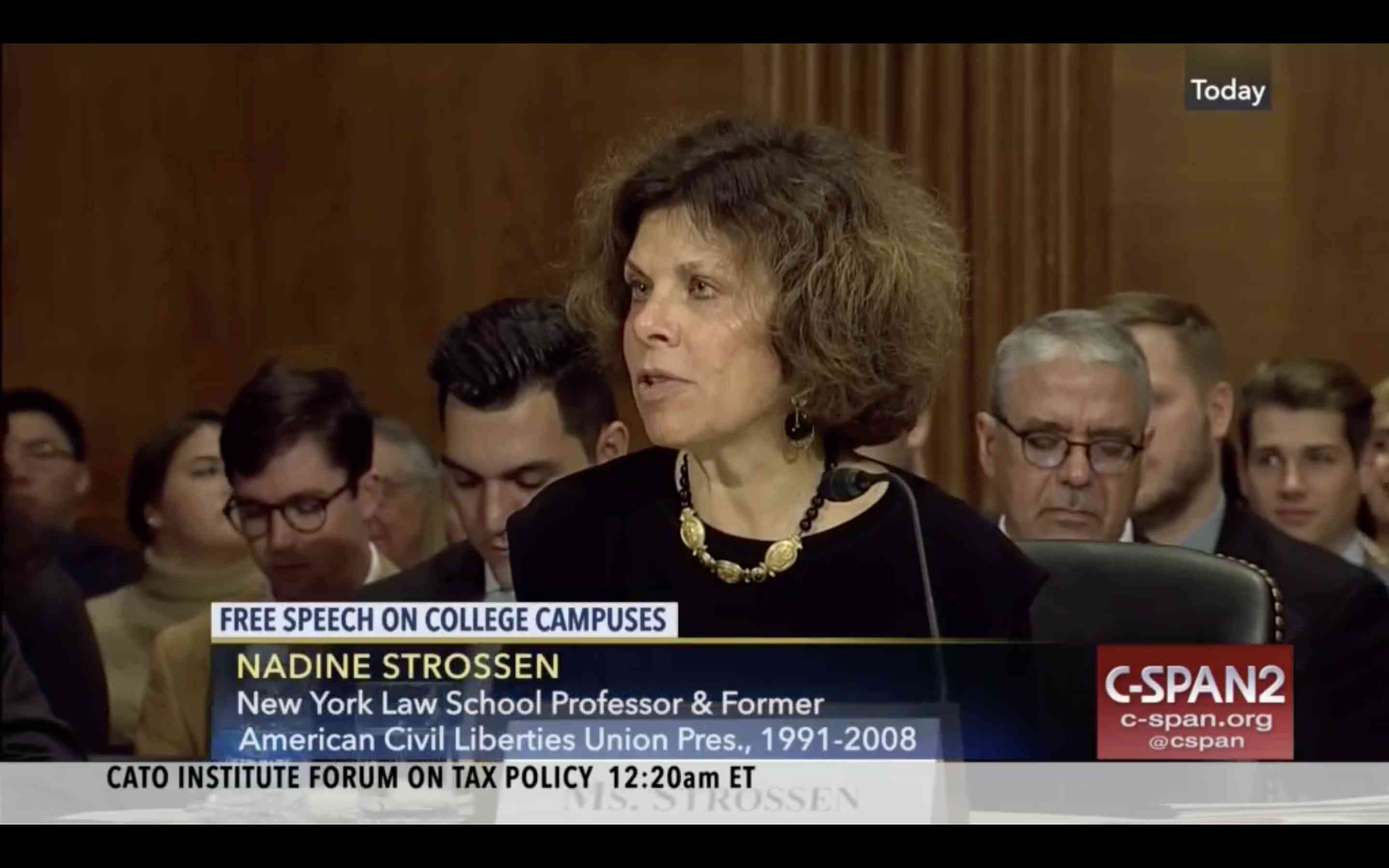 American Bar Association’s "Margaret Brent Women Lawyers of Achievement Award" which celebrates the accomplishments of women lawyers who have excelled in their field and have paved the way to success for other women lawyers (one of five women honored) – New York City, August 13, 2017

“Above and Beyond” award, “Honoring 25 of New York’s Most Remarkable Women” – presented by City & State New York – New York City, March 28, 2017 (one of five women honored in Education category)

Jewish Council for Public Affairs, Albert D. Chernin Award (“presented annually to an American Jew whose work best exemplifies the social justice imperatives of Judaism, Jewish history and the protection of the Bill of Rights, particularly the First Amendment”) -- February 20, 2010

Selected as the focus of the annual scholarship symposium sponsored by the University of Tulsa Law School and the Tulsa Law Review - for symposium on “Nadine Strossen: The Scholar as Activist” - September 2005

“Woman Who Dared” Award – Presented by the National Council of Jewish Women, Triennial Washington, D.C. Institute - March 7, 2004 (the last recipient of this triennial award was Ruth Bader Ginsburg in 2001)

Dr. Lester Grinspoon Award for Outstanding Achievement in the Field of Marijuana Law Reform Advocacy - Presented by NORML, The National Organization for the Reform of Marijuana Laws - April 2003

Resolution of Toledo City Council, Toledo, Ohio, “Recognizing and Welcoming Nadine Strossen, Featured Guest at the ACLU of Ohio 50th Anniversary Celebration, May 24, 2002" (resolving that “Nadine Strossen . . . is hereby congratulated for her belief that the First Amendment right to free speech is the greatest protection to women’s rights . . . and further encouraged to continue her passionate dedication to her beliefs and the continued fight for the rights and freedoms of everyone”) - May 24, 2002

Clarence Darrow Award – Presented by the International Platform Association (“given in honor of IPA’s former member, for contributions to our nation’s system of justice”) - 2001

Public Service Award – Presented by The Society for the Scientific Study of Sexuality, Western Region – “in recognition of her courage and tireless work educating the public, inspiring colleagues, and defending the sexual rights of all Americans” – April 1999

Distinguished Alumni Award – Presented by Classic Lake Conference High Schools, Minnesota –“In Recognition of Outstanding Accomplishments as a Spokesperson for the Defenseless and Women’s Rights” - 1998

New York University School of Law Award – Presented by Public Interest Foundation, for "Her Contributions to Public Interest Law and Legal Education and for Her Work to Protect and Advance Civil Rights and Liberties" - 1996

Roger N. Baldwin Civil Liberties Award –Presented by ACLU of New Jersey, for "Her Vigorous Promotion of the Bill of Rights and Her Untiring Devotion to the ACLU" - 1996

Honorary National Member of the Order of Barristers, for "Having Exhibited Excellence and Attained High Honor Through the Art of Courtroom Advocacy" - 1995

The first Richard S. Arnold Prize for Distinguished Scholarship in Freedom of Expression—Presented by the Speech-Communications Association - 1993

"The Outstanding Young People of the World Award” – Presented by Jaycees International - 1986 (one of seven people selected from 75 countries with Jaycees chapters; first American woman to win award)