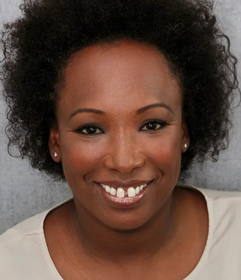 The incredible plumber who's flushing away gender stereotypes. Judaline's dedication to equality extends beyond her own industry; she brings her powerful voice and passion to social issues that affect women and girls.
Judaline is a superstar. – Dyllan McGee, Founder & Executive Producer of MAKERS

Prior to her acceptance into the Union’s five-year apprenticeship program, she worked as a nanny and housekeeper. She's been a proud member of Plumbers Local Union No. One New York City for the past twenty years. Being a qualified Plumber has drastically changed her life, and also the lifestyle of her family. Financially, it has afforded her and her family upward mobility in society.

Judaline was of the very first women accepted into Plumbers Local Union 371 Staten Island New York, and the first woman elected on the Examining Board of Plumbers Local Union No. One. With her leadership, she ushered in the first Women's Committee within her Union of which she's the President. She also serves on the Advisory Board for the Women’s Building NYC, a hub of activism and engagement that will offer social justice leaders the resources and support they need to drive critical change.

In June 2017, Judaline Cassidy established the non-profit Tools & Tiaras Inc. whose primary goals are to expose, inspire, and mentor young girls and women about the highly lucrative field of construction. Tools and Tiaras provides free monthly workshops led by women.

Judaline was a featured speaker at the 2017 Makers Conference, interviewed by Megan Kelly on the Megan Kelly Show, and appeared on the BBC’s The Conversation.‍

In Pursuit of Equality

"I know wherever I walk in this world, I am black. I give 100% all the time. When you do that and they give you flack, rest assured your work is the silencer to the naysayers. Your work ethic is your strength."

In her talks, Judaline Cassidy shares the story of her difficult upbringing in Trinidad and Tobago, her training in the trades, and the challenges of working and interacting with customers and coworkers in a predominantly male industry. When Judaline moved to the US at age 19, she worked as a housekeeper, a nanny and a personal shopper. Now, Judaline is the leader of the non-profit Tools and Tiaras and a celebrated leader of young girls and women. Hers is a inspiring story of grit and the lifelong pursuit of equality for the sexes.

There are speakers and then there are superstars. Judaline is a superstar. We have had many speakers on the MAKERS Conference stage, but there is something special about her. Her message has resonated well beyond when she spoke a couple of years ago—people always ask about her and are curious what she’s up to. And it’s because she’s passionate about what she does, her message speaks to an audience well beyond the topic of plumbing (although that topic alone is so complex and what she is doing to make change speaks volumes to her inspiring passion to help others), and she has a power and kindness that resonates on stage. To know Judaline is to love her and I put her in my top 10 list of speakers who have ever been a part of MAKERS. – Dyllan McGee, Founder & Executive Producer of MAKERS

Judaline Cassidy was a keynote panelist at our annual Fearless Fest event in April 2018, and brought the house down with her signature charm, wit, and tell-it-like-it-is personality. She’s ac aptivating storyteller, an impassioned champion of equality, and a powerhouse of inspiration, but she’s also relatable, approachable, and genuine, not to mention hilarious. Judaline delivered a talk that was as meaningful as it was entertaining, and weeks after our event we were still receiving notes from guests about the impact hearing her speak had on them. As a serial entrepreneur who has hosted and produced countless high-profile events over the last two decades, I have never worked with anyone who has the ability to move and motivate an audience quite like Judaline does. She is truly remarkable. – Jen Jones, co-founder of omen You Should Know/Women You Should Fund

As Vice President of our organization I am always careful when I refer a keynote to our events team for our national meetings. Once I saw Judaline through a series of videos I knew she would be the perfect fit for our national event and enthusiastically sent her name to our events team with the directive “let’s find which meeting we can get Judaline signed to.” Judaline did not fail to meet and exceed our expectations. Well prepared, full of energy and passion with a message for our attendees that they understood and immediately wanted to take action on. Judaline cannot be confined by her titles or descriptors ofTrailblazing woman, or Industry shifting plumber, because she is both and so much more. I am motivated by Judaline and her message. I am honored to have shared our platform for her to speak at, and look forward to working with her year round with Tools and Tiaras, and hopefully again soon at one of our national events. – Julian Scadden, VP Operations Nexstar Network