Mandy Harvey, a professional musician, has turned a major life pivot into her biggest strength. By the age of 18, Harvey had completely lost her hearing. Not only could she no longer hear the world around her, but she could no longer hear herself. She relied on her experience as a singer with near perfect pitch to help catapult her to success and the ability to inspire others to embrace their pivot.

“If I take back any of the bumps, bruises or scrapes I’ve been through,” Harvey expresses, “I wouldn’t be the same person. I would tell my younger self, ‘this is going to be hard but you’re going to get through it and you’re going to be better for it. Just keep going.’”

Harvey began singing in her local choir at the age of four. It was a way for her to express herself. She had always been hard of hearing so the choir served as an outlet for her to understand all the words that were being spoken. “I had to get close to the piano to hear the pitch,” she explains. “Once people started singing I could no longer hear myself. You get used to trusting yourself a lot more.”

Until she attended college, her entire life was built on the idea that she was going to be a music teacher. However, in order to attend school for vocal music education, Harvey had to be able to hear. “It felt on several levels that I had died,” she expressed. “I made the mistake of pouring my entire identity into one single dream and convincing myself that I was not capable of anything else or creating any other dream. That was my biggest mistake in the whole experience.” 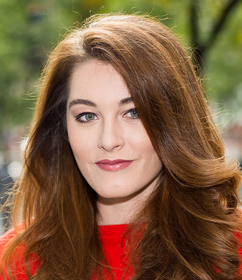